Colleagues fundraise £4,500 for ARI and We Too! after workmate beats cancer 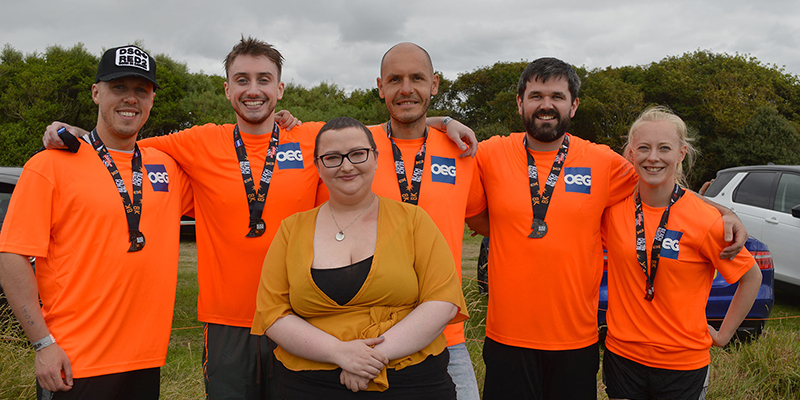 A local Aberdeenshire workforce has raised £4,500 for Aberdeen Royal Infirmary’s Breast Cancer Unit and local charity We Too!, after being inspired by a colleague’s brave fight against breast cancer.

Ryan Duguid, Oliver Moore, Craig Smith, Pawel Pasko and Rebecca Laing, who work at Kintore-based OEG Offshore (OEG) alongside Kirsty Mortimer, were inspired to take part in the Beach Ballistic event at Balmedie Country Park earlier this month in recognition of her successful battle against the disease. The group raised £2,250 through sponsorships for taking part in the challenge, which had been rescheduled due to Covid pandemic restrictions in 2020. Bosses at the firm matched this taking the total to £4,500.

Kirsty, a financial analyst for OEG, cheered her supportive team mates on from the side lines as they navigated the gruelling activity weekend. This included Pawel, taking part in both the 16km race on the Saturday, before running alongside his colleagues and winning the 8k obstacle course on Sunday. All participants and spectators then joined a company BBQ arranged for all staff and their families to relax and enjoy the summer afternoon together.

The 27-year-old first noticed an unusual lump following her covid vaccine last summer and went on to receive chemotherapy and radiotherapy at ARI, as well as a lumpectomy to prevent the cancer from spreading any further.

Kirsty said: “It was a huge shock when I was first diagnosed with cancer last year. After visiting the doctor, they thought that, due to my age, it was most likely a cyst. However, further tests showed that it was breast cancer, which had already spread to my lymph nodes.

“There was no family history of the disease, and I felt otherwise, well. Thankfully, it was caught early and my treatment was successful. It was an emotional day when I rang the bell to celebrate being cancer free. Now with on-going treatment hopefully stopping it from coming back, I’m looking forward to returning to the office after two and a half years working from home”.

Clive Hoskisson, UK Managing Director at OEG said: “Kirsty is an amazing young woman who is a very popular and valued member of our team. Everyone is over the moon that her treatment has been successful, and fundraising seemed an appropriate way for us to mark her achievement and support others going through the same journey.

“Kirsty started with OEG as a temp eight years ago and has flourished ever since. She decided to continue working as much as she could while she was ill, and has even kept up her studies to become a chartered accountant. We are thrilled she is back to full health, and it’s great to have her positive energy back in the office.”

Kirsty added: “It was very touching that my colleagues decided to take part in Beach Ballistic and OEG thought of me when deciding to match the fundraising. I can’t thank the staff at ARI enough for all they did for me, and all with a smile. They absolutely work their socks off to go above and beyond to make you feel very looked after.

“If there’s one thing that I’ve taken away from all of this, is that cancer doesn’t have to be a life sentence. It can be manageable, and a positive mind set can be the first step in getting through it. The ARI staff and other cancer patients really encouraged this and I’m so happy to be able to give something back.”

In addition, We Too! has also received part of the total raised, after a member of staff had nominated the charity in 2020. The local charity is a parent driven organisation which aims to empower families of children with predominately, hidden disabilities.

Phionna McInnes, Chief Executive of We Too! said: “I am absolutely blown away with the amount of money Kirsty and OEG has raised. As a small charity, this is fantastic and will go straight to our front line, where resources are needed.

“We have been gifted a unit space within Aberdeen Trinity Centre for at least a year and have been working hard to develop a parent/carer drop-in centre complete with sensory space. The money raised by OEG will allow us to finish the build and then any remaining funds will be used for sensory back packs which we take along to events to give out to anyone who may be feeling sensory overloaded.”

If anyone would like to add to the funds already raised, donations can be made here: OEG Offshore, fundraising mission @Beach Ballistic