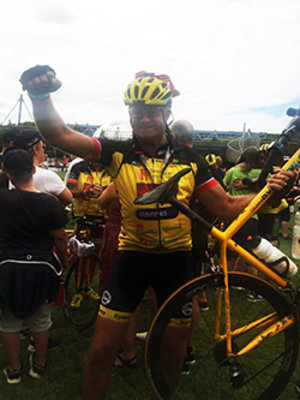 Congratulations to Eirik who participated in the Team Rynkeby Rogaland (Stavanger) Team and cycled from Oslo to Paris. Over the last few months Eirik has cycled over 4,000 kilometres including 1,280 kilometres during the 7 day Tour de Paris event. The team raised millions of NOK for the Children’s Cancer Foundation.

“The selection criteria is tough. You need to be motivated to raise money and train hard in the Spring before the Tour de Paris commences. It was the hardest workout ever” commented Eirik.

The Finish Line
The 38 Team Rynkeby teams cycled to Paris along different routes starting in Scandnavia, but once they arrived in the city all 1,600 riders gathered for a parade ride of the last 15 kilometres to Prairie du Cercle Sud in the north-eastern corner of Paris, where thousands of friends and family members awaited them.

Team Rynkeby is a Nordic Cycling team who raise money for children with cancer and their families by cycling to Paris.