OEG Offshore donate 20ft container and raise over &pound;750 for FROM Scotland charity 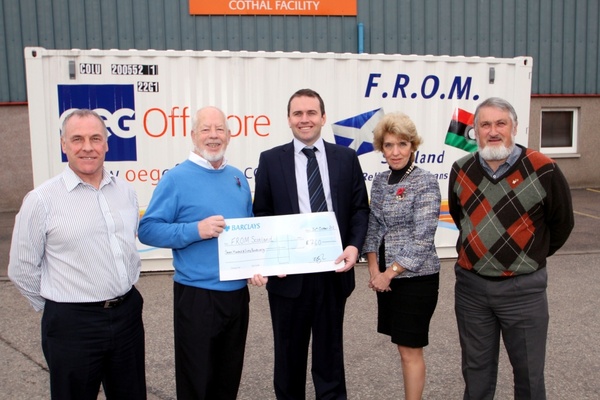 OEG Offshore, suppliers of offshore cargo carrying units (CCUs) and A60 modules, support Famine Relief for Orphans in Malawi (FROM Scotland) with a 20ft Offshore Container and a cheque for over £750.

OEG Offshore held their annual staff event, ‘The OEG Offshore Challenge’ at Lochter Activity Centre this summer and raised an impressive £760 for FROM Scotland by holding a charity raffle.

OEG continued to support FROM Scotland during the year by donating a 20ft container to transport back packs for school children, knitted clothing as well as vital medical supplies and equipment to villages in Malawi.  In addition to gifting the container, which has been specially branded with the F.R.O.M. Scotland logo, OEG Offshore will also cover the cost of shipping the container to Blantyre, Malawi when it is filled and dispatched early next year.

Dave Thomson, FROM Scotland charity representative, expressed his delight with the branded container stating; “On behalf of the Trustees of FROM Scotland and all the vulnerable people in Malawi who will be helped by the arrival of the supplies in the container, a massive thank you to OEG Offshore for this amazing gesture.  Money we would have had to spend on shipping can now be spent providing much needed help to families and health facilities. The support we have received from OEG Offshore staff has been unbelievable and is very much appreciated.”

FROM Scotland’s Patron is international singer and broadcaster Fiona Kennedy.