What is an offshore container?

The European Committee for Standardization EN-12079:2006 standard defines offshore containers as a “portable unit, specially designed for repeated use in the transport of goods or equipment to, from or between fixed and/or floating offshore installations and ships.”

Offshore Goods Containers
An offshore container built for the transport of goods, which can include general cargo containers, cargo baskets, special containers, boxes and gas cylinder racks.  Offshore portable tanks are also included in this category. These are used to transport dangerous goods used offshore, and must also meet the International Maritime Dangerous Goods Code. 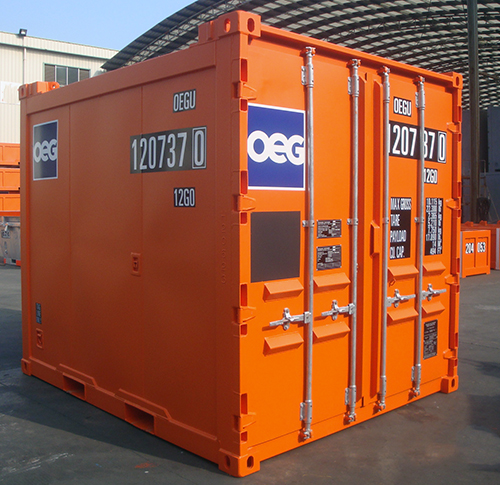 Offshore Service Containers
Custom-built containers for a specific task that are generally temporary. Examples include labs, workshops and control stations.

Offshore Waste Skip
A container that holds waste that can be open or closed.

Offshore containers are also commonly called “skids” in the offshore oil and gas industry, they are often used to transport large components to drilling and production rigs. These can be as simple as frames that hold the contents. The skid, along with its contents, is sometimes referred to as a “skid package.”

THE DIFFERENCE BETWEEN ISO CONTAINERS AND OFFSHORE CONTAINERS

1.   Exposure to Harsh Environments
Offshore containers are often left exposed to open sea on the decks of supply vessels, and also loaded to platforms in harsh weather conditions, this also means that the minimum design temperature is normally specified as -20° C and the primary structure requires material of sufficient toughness for -20° C.

2.   Loading and Unloading Forces
Because many offshore containers cannot be used with typical lifting equipment such as spreader beams, the methods of loading and unloading put different types of pressure on the structures of offshore containers. Offshore containers are supplied with a permanently installed sling set. Most do not have corner castings, and if they do, they are not allowed to be lifted from them.

3.   Non-standard Designs
Most offshore containers are built to fit a specific piece of equipment, and as a result, do not fit into the categories of ISO containers.

CSC
Convention for Safe Containers (adopted 1972). Developed by the IMO to institute uniform international safety regulations for the transport of marine freight containers.

IMDG
International Maritime Dangerous Goods Code. Enacted by Safety of Life at Sea (SOLAS) regulations and adopted as law by 162 governments and entities.

IMO
International Maritime Organization. The IMO publishes the IMDG code, the CSC regulations and is the holder of the SOLAS convention.

IMO MSC/Circ. 860
Guidelines for offshore container approval issued in the supplement to the IMDG Code.

SOLAS
Mostly known as “Safety of Life at Sea,” the SOLAS is an international convention or treaty adopted by 162 contracting States. It requires that flag States ensure their ships comply with minimum safety standards in construction.