Are you ready for a truly global container standard? 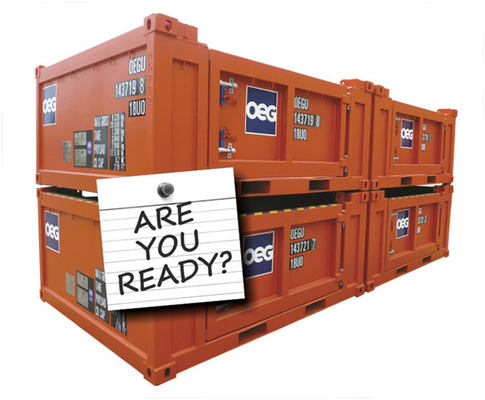 The new ISO 10855 Standard is scheduled to come into effect in late 2017 which will govern the World’s Offshore Container fleet; is the offshore oil & gas industry gearing up to embrace a truly global standard?

In the early days of North Sea exploration it was eventually recognised that exposure to harsh environments such as extreme temperatures, wave slam, dynamic lift characteristics with floating installations, loading & unloading forces and the increasing non-standard sizes associated with Cargo Carrying Units (CCUs) that a much higher standard of safety was required in order to protect personnel, equipment and assets.

As a result (for those that can remember the late 70’s early 80’s) the game changing ‘Offcon’ standard was born and adopted in the North Sea.

In the late 90’s the Maritime Safety Committee (the highest technical body in the International Maritime Organisation “IMO” who publishes the IMDG code, the CSC regulation and the holder of the Safety of Life At Sea convention “SOLAS”) released MSC-Circular 860 which set out basic design and approval requirements for Offshore Containers handled in open seas.

DNV (now DNV GL) was the first organisation to produce a detailed design, testing and manufacturing standard for Offshore Cargo Carrying Units (DNV 2.7-1). The European Norm EN 12079 was the first recognised ‘international standard’ which covered the detailed design criteria, testing and manufacturing of CCUs and was quickly accepted by DNV as being equivalent to their own standard. This is why most of the CCUs being built today around the world are dual certified to DNV2.7-1 / EN 12079 as normal practice.

To date the offshore CCU industry has been following various recognised standards and some other regional specifications around the world (overlaid with multiple customer requirements in addition to the standards themselves; mostly through misunderstanding or misinterpretation of the standards) which has only added to the confusion for CCU companies and end users alike when locating and relocating CCU equipment from one region to another.

What the industry was screaming out for was an all inclusive global standard applicable to offshore cargo carrying units … Tah Dah! ISO 10855 was born.

Offshore operational safety is typically the main driver behind continuous improvement and the new ISO 10855 Standard is no exception; it is set to amplify these key factors for container materials, design and testing as well as augmenting the humble old “offshore CCU workhorse” into the welcoming arms and dizzy heights of Global Standards recognition. In all seriousness, this is a major step forward in developing a “harmonized” standard that will act as the industry norm not only for the CCU industry, but will also provide the necessary clarity and definition for end users right across the global Oil & Gas industry.

The ISO working committee has listened extensively to the industry with a view to reviewing all aspects of the new standard. The committee has consulted with industry experts, certifying authorities, CCU manufacturers, and CCU rental companies, other key stakeholders for their operational, design and manufacturing contributions to collaboratively shape the new ISO 10855 Standard.

This lengthy consultation period has been necessary, given the various standards being applied and has now progressed into the development phase. Regarding an implementation date, ISO has indicated that it’s due to publish towards end of 2017 and it will be part of the International Classification Standards category: 75.180.10 exploratory, drilling and extraction equipment.

What we do know at this stage is the ISO 10855 standard will comprise 3 parts and cover offshore containers and associated lifting sets; Parts 1 & 2 will focus on the requirement for new container and sling set design, manufacture and marking and Part 3 will addresses periodic inspection, examination and testing. In addition, the new standard suggests that other internationally recognised standards can be used where the manufacturer and the certifying authority document that an overall equivalent level of safety can be achieved.

Where does it leave existing domestic offshore container standardisation in the USA for example? Will API RP CCU2 be widely accepted as the industry yardstick or will the end users fully embrace the new ISO standard to gain cost efficiency & flexibility in a global market?

It’s really too early to predict what impact, if any, will be felt across the CCU supply chain or the costs associated with the implementation of the new standard. The initial feedback from the CCU market is positive and that it has been developed at a time when the offshore oil and gas industry is currently reinventing itself in the face of many challenging conditions. With these challenges brings a constant thirst for cost efficiencies, standardisation, synergies, innovative solutions, increased safety & quality which sometimes leads to a silver lining of new opportunities for change.

ISO 10855 is expected to be a supporting standard for the IMO regulation MSC/CIRC 860 “Guidelines for the approval of containers in open seas”, and replace the EN 12079 European standard. Therefore can this new ISO standard achieve the objective of consolidation & clarification? Only time will tell.

One thing is certain, any company involved with the design and manufacture or maintenance of CCUs for offshore should be prepared and ready for when the new ISO 10855 standard is published.

The IMDG code addressed the special nature of offshore containers and portable tanks handled in open seas and recognised that these are different from conventional containers (the inspection of which are governed by the Convention for Safe Containers – CSC) and as part of an effort to harmonise the implementation of the IMDG and CSC, the IMO developed MSC/CIRC 860 “Guidelines for the approval of containers in open seas”.

MSC/Circ 860 does not contain detailed technical requirements; instead it is a guideline for how approving competent authorities should base their approval of offshore containers.